Something big is happening in the housing market

Great Deceleration-The most competitive housing market ever is finally showing signs of breaking.

As data trickles in for April, it’s becoming clear that the historically hot housing market has flipped trajectories. It’s now in cooling mode. The number of homes listed for sale is rising again. Fewer shoppers are scheduling tours. And Redfin reports 15% of home sellers in April cut their asking price—up from 9% a year ago.

This softening is by design. The Federal Reserve is done watching inflation run away, and has made it a priority to cool down one of its biggest drivers: the housing market. To do so, over the past few months, the Fed has put upward pressure on mortgage rates. In December, the average 30-year fixed mortgage rate sat at 3.11%. As of last week, that rate is up to 5.27%—its highest level since 2009.

But homebuyers shouldn’t get too excited—yet.

While inventory levels are rising fast percentage wise, they’re still far below pre-pandemic levels. Look no further than Coeur d’Alene, which saw inventory spike 54% between late March and early May as it went from 242 to 373 active listings. However, that’s still 62% below the 980 listings it had the first week of May 2019. Simply put: Even if the Great Deceleration picks up steam, it will take time before we’re back to a pre-pandemic housing market.

The housing market is still savagely unhealthy because [of low] total inventory levels in America. . In order for us to return to a “normal” housing market, his economic models show we need to see national inventory rise to a range between 1.52 million to 1.93 million units. The National Association of Realtors’ latest reading has inventory at just 1.03 million units.

Heading forward, experts biggest fear is that mortgage rates begin to fall again and the momentum is lost. If that happens, theGreat Deceleration could get put on pause.

This is all leading to a more balanced housing market- not a crash.  Think about it like this…we had insane housing appreciation of almost 35% in San Diego County….a normal market is closer to 3-5% in annual appreciation, therefore we have lots of room to balance out this housing market to a more healthy level. 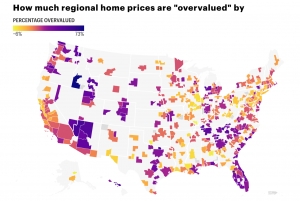