According to the California Association of Realtors, the housing market continues to adjust as we move into the off season. Home prices are cooling off and we will unlikely see another record statewide median price before 2022. While fewer listings are expected to come onto the market in the fall than in the spring homebuying season, sales actually remain solid despite some pullback in demand due to recent rate hikes. With the economic recovery remaining on course but progressing at a slower pace than anticipated, inflationary pressure will hopefully ease in coming months. Rates are expected to rise modestly but will remain low, and the housing market should remain stable throughout the rest of the year. 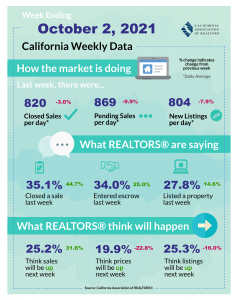 Consumer Confidence Falls for the Third Consecutive Month: Inflation and COVID-19 concerns continued to put pressure on confidence among Americans, as the consumer confidence index fell to 109.3 in September from 115.2 in August. The present situation index, which reflects consumers’ assessment of current business and labor market conditions, dropped to 114.3, while the expectation index declined to 86.6. Cautious consumers will likely result in curtailed spending and slower economic growth going forward. Despite the overall indicator dropping to the lowest level in seven months, improvements could be seen in coming months as the COVID situation continues to show signs of progress, while inflation appears to be easing.

Interest Rate Topped Three Percent: Mortgage rates rose across all loan types last week as the 10-year U.S.  Treasury yield reached its highest level since June. The average 30-year fixed-rate mortgage (FRM) surpassed the three percent threshold for the first time in three months, as investors were concerned about inflationary pressures and tight monetary policy. Mortgage rates will likely rise modestly for the rest of the year, as the economy is expected to grow in the third and further quarters. There are signs of consumers pulling back, however, and the upcoming September job report will shed some lights on the direction of the rate trend.

Mortgage Application Continues to Trend Down: Higher rates lowered mortgage applications even more in the past week as both purchase and refinance applications dipped in the week ending September 24. New home purchases posted their 19th consecutive year-to-year decline, and the purchase index was 12% lower than the same week one year ago.

New Home Construction Spending Dips in August: While overall construction spending was virtually unchanged from the prior month, spending on single-family and multifamily both declined month-over-month in August, due partly to shortage in raw material and the run-ups in building costs. Residential outlays did rise 0.4% and increased for the sixth consecutive month, but the gain in the residential sector was due solely to an increase of 2.5% in remodeling spending. On a year-to-date basis, residential construction spending continued to climb solidly by 25.8% though.

Economists Downgrade Economic Outlook: The impact of supply chain disruptions, along with the spread of Delta variant, prompted economists to lower their expectations on economic growth. The September 2021 forecast released by UCLA Anderson Forecast downgraded the Q3 2021 GDP growth rate to 3.3 percent from 7.8 percent in June. The widespread in Delta variant, the dip in consumer enthusiasm, and the disruption in global supply chain all contributed to the reduction in expectation in the economy. Meanwhile, Merrill Lynch also lowered their Q3 2021 GDP growth rate to 4.1% last week from 4.5% in the prior week (9/24/21), while Goldman Sachs’ forecast remained unchanged at 4.25% as of October 1.

Slowdown Due to Seasonality or Rate Hikes? The seasonal slowdown continued as the market moved into the last quarter of the year. Consistent with patterns we observed in past Octobers, the share of REALTORS® who believed prices would increase next week dipped to 19.9%, the lowest level since July 2020. Those who believed listings would go up next week also dipped to the lowest level (25.3%) in 2021. Interest rates might have played a role in the dip in future price expectation as well, as the average 30-year FRM went up to the highest point in three months this past week. The recent surge in rates could be the reason why share of buyers who expressed fatigue or feeling burned out was at the highest level in seven weeks.

What do you think will happen in the housing market?  For more information, visit my YOUTUBE channel!